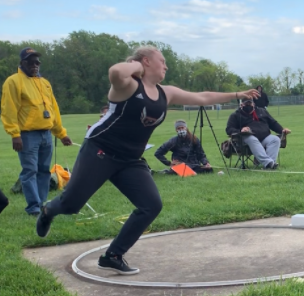 The 2021 Girls and Boys Track teams are working hard to make the most out of the seniors’ track experience. Despite having a smaller team than in years past and after spring sports were taken away from athletes last year, student-athletes have come back with the opportunity to get in a spring season.

Coach Fourney said he believes that this year athletes are much more grateful to have a season.

“They’re more enthusiastic, we don’t get many kids having mysterious doctor’s appointments at 2:30,” Fourney said.

“This season has been super strange. It’s almost like relearning everything about the sport since I haven’t really done it since sophomore year,” Pease said.

Not only is the season posing the challenge of athletes having to deal with a year off from the sport due to last season’s COVID shut down, but also, the shortened season has eliminated many of the meets.

“This season is not too different from others, but the amount of meets we have has changed drastically. Two years ago we would have two possibly three meets every week,” Walton said. “This year we are lucky if we have two in the same week.”

This season can be cut short at any moment. The track teams could go from being very talented teams one day to the next day being shut down for two weeks explained Coach Fourney.

“Don’t take anything for granted. Things can get shut down at any time, so take advantage of what you can,” Fourney said.

Although the 2021 spring season has been shorter than usual, the athletes still have goals to achieve this year. With a group of experienced seniors, the coaches explained these individuals are helping lead the relatively inexperienced team through this strange season.

Luke Walton hopes to “enjoy my last few meets and compete with some of the best throwers in the state.”

Because of close scheduling, the girls and boys track sectional and state meets fall on dates where the seniors will be away for senior trip.

As such, senior Kiera Pease wishes to “perform well at Counties this year to become all-county since I cannot go to sectionals and states.”

In addition to the other changes of this 2021 season, the boys and girls track team has also taken on two new coaches. Technology teacher Ms. Coker has become the new girls throwing coach, while French teacher Mr. Kesten has taken on boys sprints after Coach Rossi retired last year.

Both the Girls and Boys teams have come out ready to participate this year in their respected events.  According to the coaches, the track athletes are ready to give everything they got because for all they know it could be their last high school track meet in the blink of an eye.