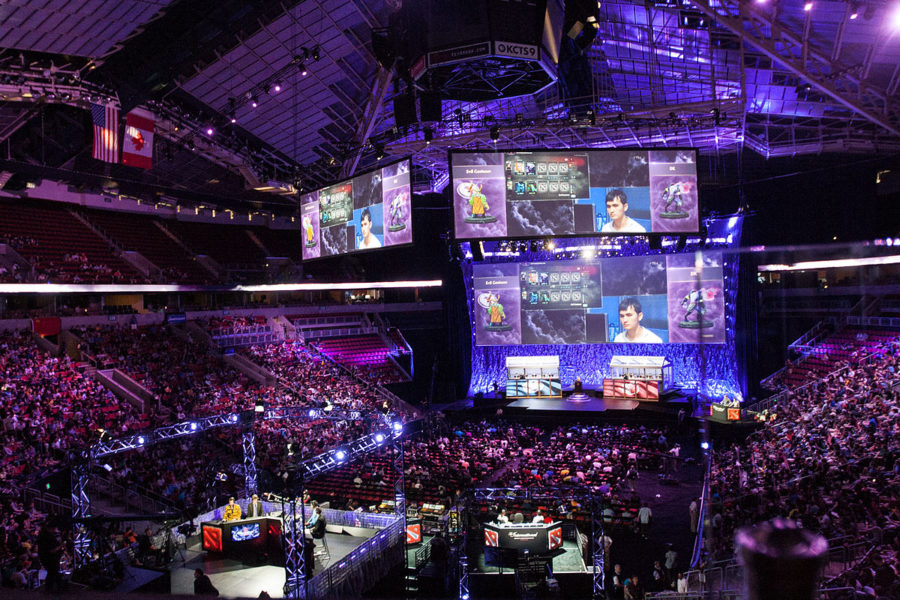 Fans sit and watch competitions similar to "The International," which featured teams clashing over the winners of "Dota 2"

With Electronic sports, otherwise known as E-Sports, becoming more mainstream, gamers have been able to turn their passion into a career. E-Sports is the industry of competitive gaming and over the last few years the popularity has blown up exponentially.

The pivotal question to most at this point is the obvious – exactly what are electronic sports?  According to wikipedia, e-Sports are “are a form of competition using video games. Most commonly, e-Sports take the form of organized, multiplayer video game competitions, particularly between professional players. The most common video game genres associated with e-Sports are real-time strategy (RTS), first-person shooter (FPS), fighting, and multiplayer online battle arena (MOBA). Tournaments such as The International, the League of Legends World Championship, the Evolution Championship Series and the Intel Extreme Masters provide live broadcasts of the competition, and prize money to competitors” (https://en.wikipedia.org/wiki/ESports).

Mentions of E-Sports have been popping all over the place and this year they found their way to Cinnaminson High School, which has taken the sport by the helm. Senior  Brandon Wixted along with CHS Crisis Counselor Anthony Faltz are the founders of the E-Sports club, who have been working on the club’s foundations since the beginning of the school year. Mr. Faltz will be acting as manager of the club while Brandon is the president. Although originally Brandon and Mr. Faltz were expecting only a couple friends to join, the very first meeting had more than 20 members and has number has continued to grow.

E-Sports competitions have been occurring around the United States for years, featuring such popular games at Madden NFL or NBA Live or Call of Duty, but the growing nature of local or national teams had only started to occur recently.  And Brandon Wixted feels very proud in the accomplishment of bringing e-sports to Cinnaminson.

“The E-Sports club is a lot of months of work finally paying off and being much more popular than I ever expected. From only anticipating maybe a dozen players to having twenty eight students there willing to support the club is very exciting,” Brandon said.  “It’s my own legacy that I formed with the support of my founding members that is now immortalized at CHS for as long as the club has any demand. Knowing that I left that mark on the school and being recognized as the founding father of E-Sports at CHS is a great feeling.”

Not only that but those students will representing Cinnaminson High School through local competitions and tournaments that started April 9th and are scheduled to take place for the next two months. The team will be facing schools all over the North American continent. The gamers have expressed their interest and excitement.

Senior Alex Karch said “E-Sports has grown to be a booming industry that is popular amongst the youth of our generation. I nervous but excited to show what we got.”

Senior Hailey Sanflippo has expressed “I wish there were more girls who game as much as I do, but I don’t really mind being the only female apart of E-Sports team. Nobody treats me any differently. I hope to inspire other girls to be apart of the E-Sports club”

When asked how she felt about the tournament Hailey looked forward to it and expressed her confidence.

“The upcoming tournament is definitely going to be a challenge but our teams have skilled gamers and I am confident and excited that we will do well this season,” she said.

Brandon shared his opinion at the beginning of the season and the eagerness he would have in assessing his team’s strengths and weaknesses.

“The upcoming tournaments, while taking much longer than anticipated to be properly set up to practice for, is something I am looking forward to to see what kind of potential we have with the students at CHS. I am hoping this tournament can be a good starting point for narrowing down the skill of the E-Sports club’s members and how we can improve each individual’s abilities from there onward,” Brandon said.

The tournament involves many games but the ones that Cinnaminson will be taking part of are League of Legends, Counter-Strike: Global Offensive (CS:GO), and Rocket League and Overwatch, both red and black . The tournament is bracket base system and the games will be best of three.

Starting April 9th at 5 p.m, the club will streaming on the Cinnaminson E-Sports Twitch channel. Come find them there and support the team for upcoming tournament.