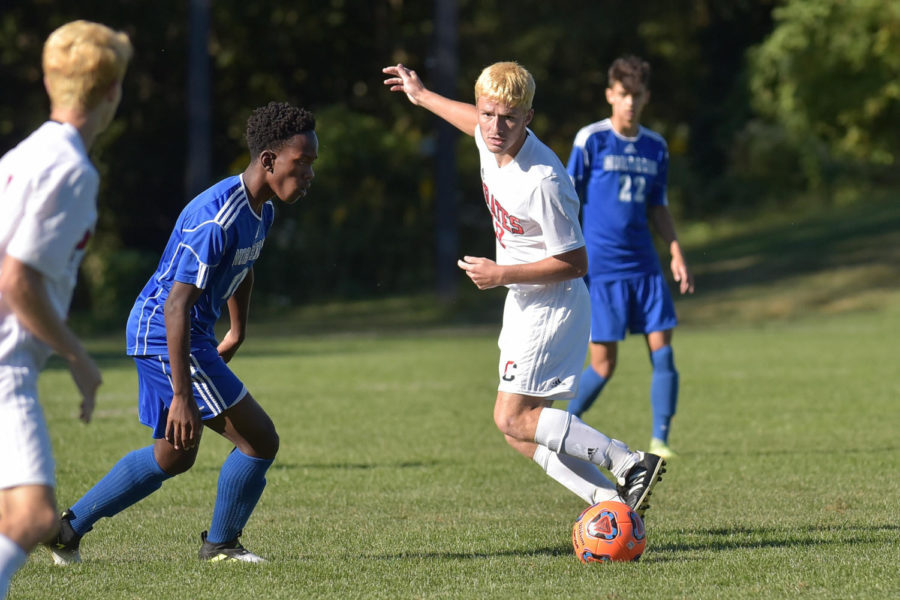 photo courtesy of The Buccaneer

Junior Shane Spence plays a ball at midfield against Northern Burlington in the Cinnaminson 1-1 tie on October 2.

The Cinnaminson Boys Varsity Soccer Team has had a decent season for their standards. With an overall record of 9-8-3, Cinnaminson placed third in their conference division, only behind Rancocas Valley and Delran.

With a regular season record of 9-7-3, the Pirates headed into the playoffs as the sixth seed and had a home game scheduled against Barnegat for October 31 with a second round game against West Deptford looming.  However, after a tough regular season, the Pirates could not match up with Barnegat and fell in an upset, 3-2, ending their season on Halloween afternoon.

The Pirates’ top goalscorer this season was senior Carlos Negron, who finished with ten goals. Not far behind Carlos was sophomore C. J. Gee with eight goals who was competing in his second year on varsity, so there are high expectations from him in the following years.

Captain Jake Vermes has had a pleasing senior year on the varsity squad, racking up five goals from defense this campaign.

“The guys are doing well,” Jake claimed.“The whole squad is coming together and we’ve improved a lot since the beginning. All of the guys have bought into the system and I feel good about it.”

Some of the highlights for the season were the 1-1 tie that Cinnaminson earned against Rancocas Valley (RV) on October 19.  RV would go on to the South Jersey Coaches Cup final and the Group 4 South Jersey final, both 2-0 losses against Washington Township.

Another highlight was the 2-0 win at cross-town rival Moorestown on September 15 where the Pirates were playing in a rare night game against the Quakers and C.J. Gee scored both goals for Cinnaminson.  Moorestown would go on to make it to the South Jersey Group 3 semifinals before its season ended.

The varsity squad will be packed with talent, even after the departure of key players such as Vermes, Jake Weick, Mike Lutz, and PJ Dluoik. Gee, Aleks Czajka, and Jon Blair are some of the talented underclassmen that are already on the varsity squad. Vermes claims the team will always be competing for the division championship and will continue to make good runs in the playoffs.

The varsity squad won most of their games this season, but the numbers were spread across the board. Their biggest win was an 8-0 triumph against LEAP Academy on October 4. The goalscorers on that day were Dan Kern and Shane Spence both with one goal each, and Cagdas Cicek, Francisco Joya, and Carlos Negron all on the double. Skies weren’t always sunny for Cinnaminson, with their biggest defeat coming at the hands of Delran in an 8-1 loss on October 25 where the Pirates rested their starters after 20 minutes in preparation for the playoffs.

Keeping the same winning mentality is the key to success according to Vermes. He says that as long as the squad keeps the same mindset, they can’t lose. As long as the Pirates have a winning attitude and work hard to win the division championship, they won’t lose. Attitude is key to a title chase.

Expect big things from the Cinnaminson Pirates in the coming years.