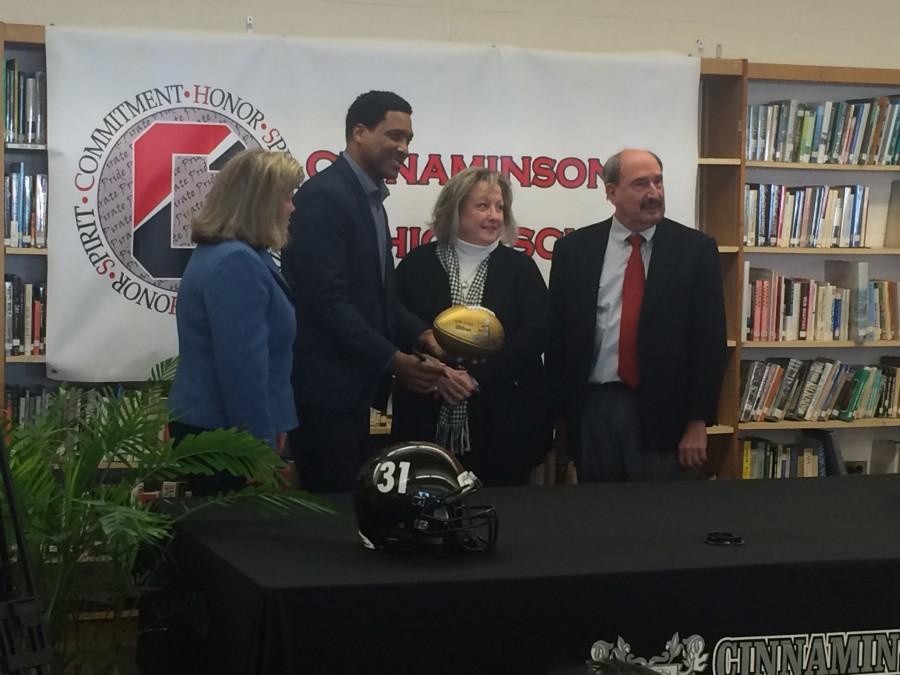 CHS Principal Mrs. Llewellyn, Collins, Board of Education President Jean Cohen and Cinnaminson Superintendent Dr. Illuzzi gather for a picture after the event.

Not many high schools can say they had a player who won an NCAA National Championship with Penn State, played ten seasons in the NFL and was part of a Super Bowl-winning team.

Yesterday, the man who grew up in Cinnaminson, NJ and starred for CHS, Andre Collins, returned to his alma mater to honor it with the NFL’s commemorative golden football.  The golden football is a gold-colored NFL football that players and and coaches who appeared in a Super Bowl can give to their school they graduated from to show their appreciation.

Andre was an exceptional athlete and student for Cinnaminson, graduating as a member of the National Honor Society. After his graduation in 1986, he went on to Penn State, where he was one of the nation’s top linebackers.  Collins was a Butkas Trophy finalist during the 1989 season, given to the nation’s best linebacker and graduated as a part of Penn State’s last national championship team from 1986 when the team defeated Miami in the Orange Bowl.  After Penn State, he was selected in the second round, 46th overall, in the 1990 NFL Draft by the Washington Redskins. He played for four different teams during his ten-year career – Washington, Cincinnati, Chicago, and Detroit.

Collins came back to the CHS yesterday, a few days before the NFL’s 50th Super Bowl, to give the honorary football in person. The Cinnaminson Football team, Cinnaminson administration, past and present school staff, former coaches and some reporters came out in support of the event that was impressively emceed by Mr. Patrizi, current football coach of CHS. He expressed his feelings toward Cinnaminson when he said, “I’ve gone all over the world, but there’s just something great here at Cinnaminson.”

Collins shared what pushed him as an athlete to do big things. “I was motivated by my coach, Coach Wallace,” Andre said. “He said ‘you gotta hustle, and play with your heart’. Every hot summer day and all those workouts, those words pushed me.”

Collins expressed his appreciation towards everybody that came to show support too. “I am so blown away to see all the people here that have helped me through my life,” Collins said.

Collins isn’t just an athlete, he graduated from Penn State with a Bachelor of Science in Health Policy and Administration. He even lived out one of his dreams for a little bit by working as a hospital administrator after his playing days were over. “It was something I’ve always wanted to do so it was great to check that off my list.”

Andre was a polished public speaker and shared some great stuff for everybody. But one thing he said was for the students there to keep school first. “Remember, it’s more important to be a student first, and an athlete second.”

He was asked about how college tried to recruit him and what he thought about while looking. “I remember tons of letters, lots of mail and visits from coaches. Not a lot of Cinnaminson players go to the NFL so I didn’t really think about it,” he continued. “I visited Stanford, Iowa, Michigan, Penn State and Illinois (on my official visits).  I wanted to attend Illinois but my mom didn’t want that so I chose Penn State. In the end, I am glad that I ended up going to Penn State.”

Remarkably, Andre had the luck to play for two of the greatest coaches in the history of the game.  At Penn State, Andre played for the legendary coach Joe Paterno, who retired as the all-time leader in NCAA wins at Penn State.  Coach Paterno actually came to Cinnaminson High School a few times back in 1985-86, sneaking in the back doors to avoid fanfare, to make sure to sign Andre.  After Penn State, Andre was drafted by the Redskins, where he was coached by Joe Gibbs, who is still among the top 20 in NFL history in coaching wins and who led the Redskins to the NFL title in Super Bowls XVII and XXVI.

Andre is still part of the NFL to this day. He has been part of the team of the National Football League Players Association, helping to guide retired player for the past 12 years. He is especially visible for the NFL during Super Bowl week at fundraisers, auctions, and other events for it too.

Back in 1992, Collins showed his hometown appreciation towards a certain person. His favorite teacher from Eleanor Rush School, Linda Adderley. He nominated her for ‘Teacher of the Month’ which if you win the NFL allows player to honor. Mrs. Adderley did win and was the first ever South Jersey teacher to win this award. The elementary school was so pleased with the nomination and award that they dedicated the walking track outside Rush school to Mrs. Adderley.

Cinnaminson Superintendent, Dr. Salvatore Illuzzi, went up to the podium and expressed his thoughts on Collins.

“You’re one of the most kind people I have ever met in my life and (most) people don’t expect that from an NFL player,” Dr. Illuzzi said.

This was the popular feeling of the day and shows how most feel about Collins, who was personally greeting each and every person who came into the library for the celebration.  CHS Principal Mrs. Llewellyn later went on to announce that CHS is going to have a trophy case for the Golden Football in order to recognize all of the achievements of Collins.

In his life, Andre Collins has pushed himself and showed Cinnaminson how hard work really does pay off.